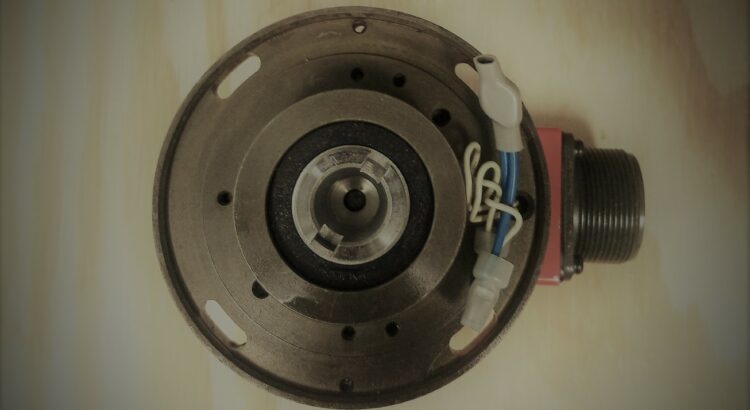 What is the role of the encoder?

For any motion control process to work, a sensing device is needed to provide reliable feedback sensing. The encoder is the part of the machinery that furnishes feedback information. How does the encoder work? The encoder receives a motion signal and converts this signal into an electrical signal that can be read by some sort of motion control system, like a PLC. The motion control system then uses the signal to control conditions such as speed, direction, and position on your machinery.  This process is consistent in any application: The exchange of information between the machine and the controller through the encoder signaling generates the exact performance function.

“The core function of the encoder is to provide information about the motion of the moving parts in your system.”

What do you need to know when choosing an encoder that is right for your application? There are a couple of fundamental points when selecting which encoder is correct for the job.

Another thing to consider is the encoder properties. Typically, this involves the number of rectangular pulses per motor revolution. A pulse number is delivered by two channels. The two channels have a phase shift of one-quarter of a pulse length, sometimes referred to as quadcounts. In this way, motor rotation direction can be detected using the four distinct states per single pulse. These four pulses represent the real resolution. For instance, if an encoder has 2,000 counts per pulse term; it gives 8,000 states per turn, which determines a nominal resolution of 360/8000=0.045°. Encoders detect motion encompassing a wide range of counts per turn. That means you must decide whether your application requires a simple encoder with fewer CPT or a more complex encoder that can detect an extremely accurate position or speed.

Other factors can impact resolution. The mechanical layout is a consideration for encoder resolution as well as other influences like analog or digital signals. Underlying physical foundations like optical, magnetic, or inductive principles can also play a part in encoder resolution.

Exposure to specific environmental elements factors into selection consideration as well. The encoder may require a shield if it is in an environment where it is likely to be exposed to conditions such as dust, moisture, or corrosive chemicals. Encoders are susceptible to environmental extremes such as temperature, shock, or vibration.

A simple approach to guide your determination in encoder options is to characterize the type of movement the encoder is monitoring. There are three commonly used encoders: Linear, rotary, and angle encoders.

The linear encoder is an encoder that senses the movement of linear objects to encode position.  A scale is determined that allows the sensor to convert the encoded position into a signal that could be analog or digital. The signal can then be decoded into a position by a motion control system. Machining tools use the linear encoder to coordinate measuring machines, such as a cut length application. In cut-length applications, the control device and encoder determine how much of a particular item, such as cloth material, is fed through the machinery, measuring where to cut. Sometimes a cable is run between an encoder and a moving object, using a transducer to produce an analog or digital output signal to establish the movement or position of the object.

For rotating objects, a rotary encoder is used. Providing feedback about the movement of a rotating object or device, a rotary encoder converts the angular position of the moving shaft into an analog or digital output signal. This signal is used to allow a control system to determine the position or speed of the shaft. Rotary encoders can be mounted directly to a motor or any machinery with a rotating shaft and are sometimes called shaft encoders. The two main types of rotary encoders are the absolute encoder and the incremental encoder.  What is the difference between the two? The difference is in the output.

The absolute encoder indicates the current shaft position, while the incremental encoder provides information about the motion of the shaft. The Absolute encoder is an angle transducer, whereas the incremental encoder typically processes information such as speed, position, and distance. Applications for the rotary encoder involve such things as robotics and industrial controls, which require monitoring and/or control.

Angle encoders are like rotary encoders; however, they are more apt to offer higher accuracy. It measures the angular position of a rotating shaft. A disc-shaped rotator uses an optical grating that operates with an optoelectric sensor on the stator. Because optical technology is dependent on the tightly constrained rotation of the rotor in relation to a stator, an angle encoder is used to keep the two parts concentric using bearings.

Encoders have the potential to elevate performance and increase productivity through their sensing technology. Selection consideration includes many aspects, some of which are presented above. For a closer look at the encoders offered at MRO Electric, please visit our website, or give us a call.